Getting to Know Your Dad’s Story is the Best Gift 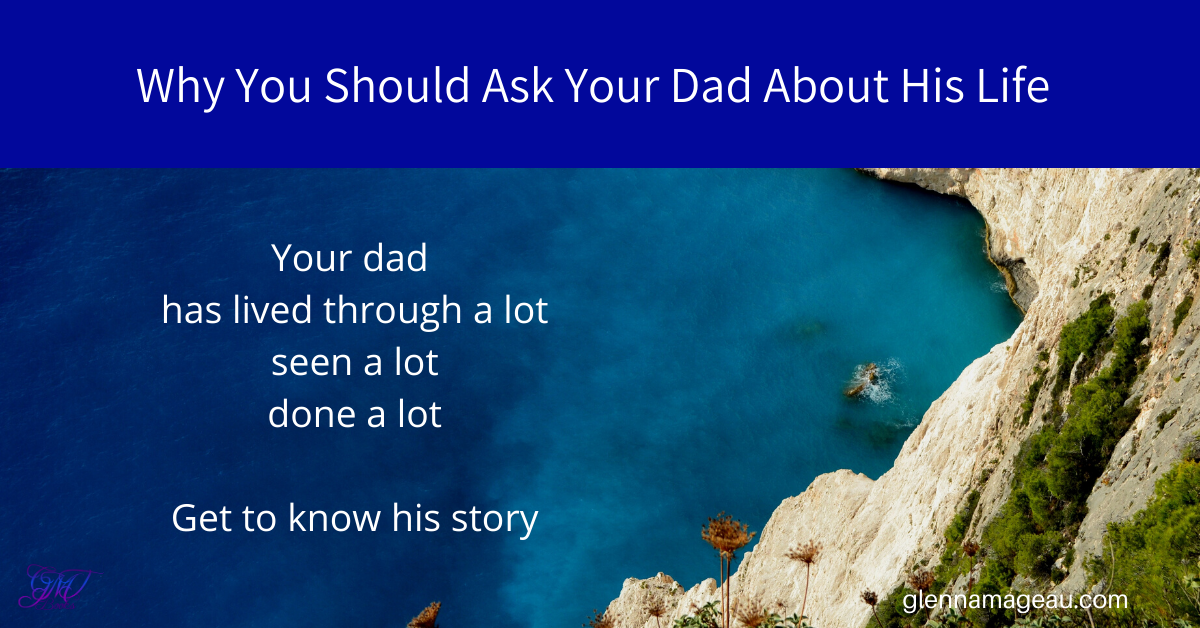 Why You Should Ask Your Dad About His Life

Asking your dad about his life, isn’t always easy. Especially if you have an older dad. But it is still important.

If you have an older dad, he had a different role and expectation than dads do today. Dads were often responsible for bringing in the money, the food and keeping you clothed and with a house over your head. Some did really well at this, while others did not.

But imagine this, you are put into a role that your only experience with it is from the generation before you, which was much stricter. You knew you didn’t like it but where were you going to learn differently. There weren’t any books on the subject. Being a father and how to raise your kids, wasn’t something you talked about. So here you are, expected to buckle up and take on this gigantic role with no guidelines, no rules and now support. You had to make it up as you went along. 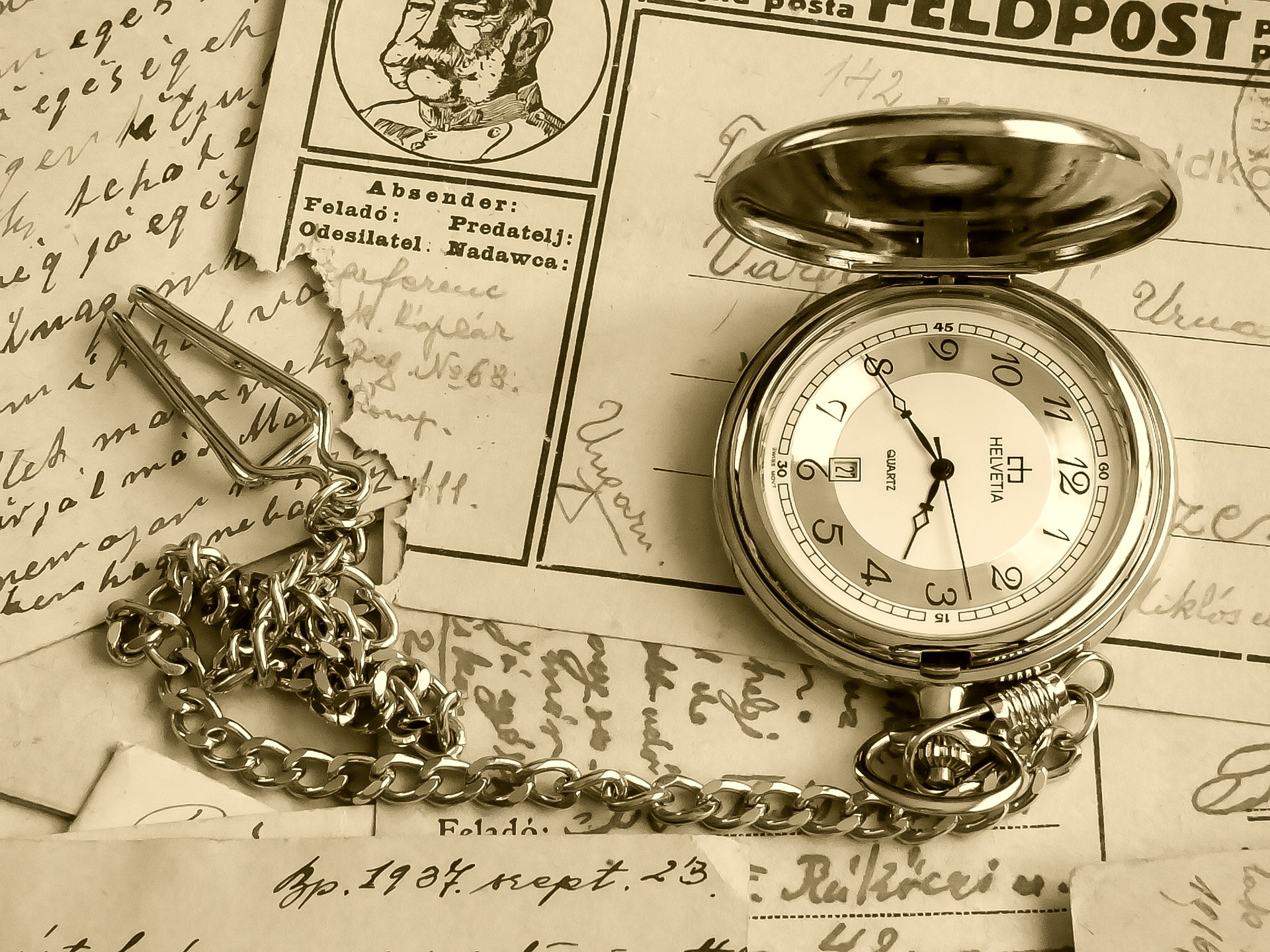 Dads may struggle with talking about their lives

So your dad may struggle with talking to you about his life. Some is because that’s what he was taught, you don’t talk about yourself or your life. Some is because he’s not sure he did a good job, so he might be embarrassed, feel guilt but he also doesn’t want to be judged. And definitely not by his children.

That’s why how you approach talking to your dad is so key to getting to learn about his life.

In, Do You Know Your Dad’s Story? The Unasked Questions, I give you several tips on how to talk to your dad, how to get him to share about his life. 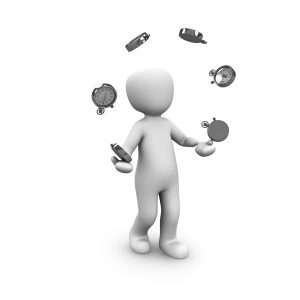 Why is it important to get to know your dad’s story?

I can tell you that I didn’t ask enough questions to my dad about his life. And now I don’t have that option to do so. He passed away many years ago. And since writing, Do You Know Your Dad’s Story? The Unasked Questions, I realize how much I truly don’t know.

So first and foremost there will come a day that you can’t ask anymore. So besides not knowing a lot about my dad’s life, I realized there are a lot of family history holes. There is a lot I don’t know about my dad and his siblings and his parents and his grandparents. So much history has been lost.

My dad was a strict man when I was growing up but there was also a softer, funnier man who would show up at times. He was a man who loved nature and would take us out to explore. I’d love to know where his love of doing that came from. He loved to fly fish and had a bamboo rod. I’d love to know who taught him and where he used to go as a kid to fish.

I could have asked more.

As my dad got older, he mellowed a lot, so I could have asked him more about his life but to be honest it never even dawned on me to do so. He was just my father and too often I guess I thought he’d always be there. I could call up whenever and ask him a question. Sadly it doesn’t work that way.

I missed out on a lot with my father.

We all have those things in our lives that we don’t want to share. We don’t want others to know. But for our fathers I think those things might have been even more devastating. They lived in a tough time, when emotions weren’t okay. You were expected to work and to work hard. Having to shove down those emotions over and over had to take a bit of a toll. Some dads became a bit hardened and distant from feelings. Now, some of those things in their life might bring up a lot of emotion for them, which they want to avoid. 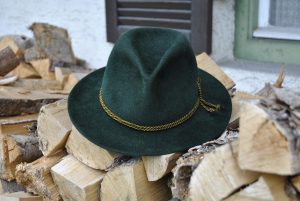 Your dad may struggle with talking about his life

If your dad is reluctant to talk to you about his life, try to fit into conversations when you are doing something. For exampe, you watch on TV or go to a baseball game with your dad. Ask him things like, did you have a TV when you were a child? Did you go watch games? Where did you go? Did you play baseball?

Start with one or two questions, see where the conversation goes. Depending on what he says, then ask more questions and make comments about what he has said.

“Yes, I played ball. I played without a glove.”

“That’s cool dad. That must have been hard on the hands. What position did you play?”

There is so much to learn.

Our fathers can teach us so much, about their lives, their families lives, what it was really like growing up in that era, what he has learned, what has worked, what hasn’t worked, what he wished he had done differently, what he is proud of … There is so much to learn. Start the conversation today. Getting to know your dad and helping him to share about his life, will help him to open up, will give you a new understanding of your dad and it can help to change your relationship. It can help you to see who the man you father really is.

Get to know your dad’s story. It truly is the best gift.

Talk to your dad. 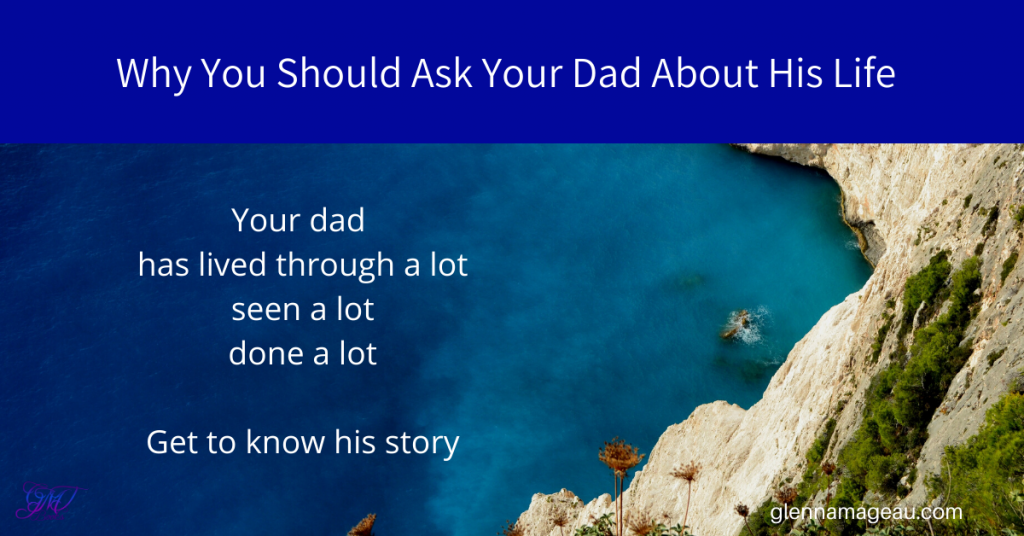 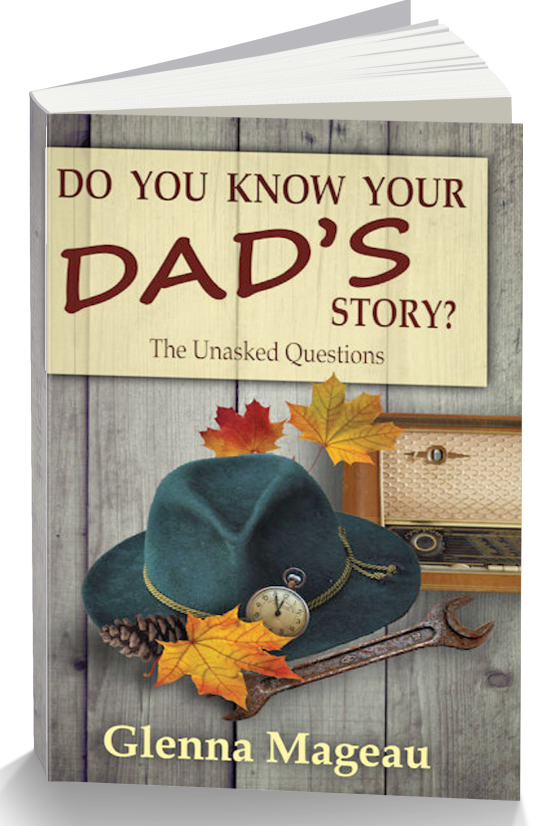 Taking the time to get your dad's story.

It is worth the journey. 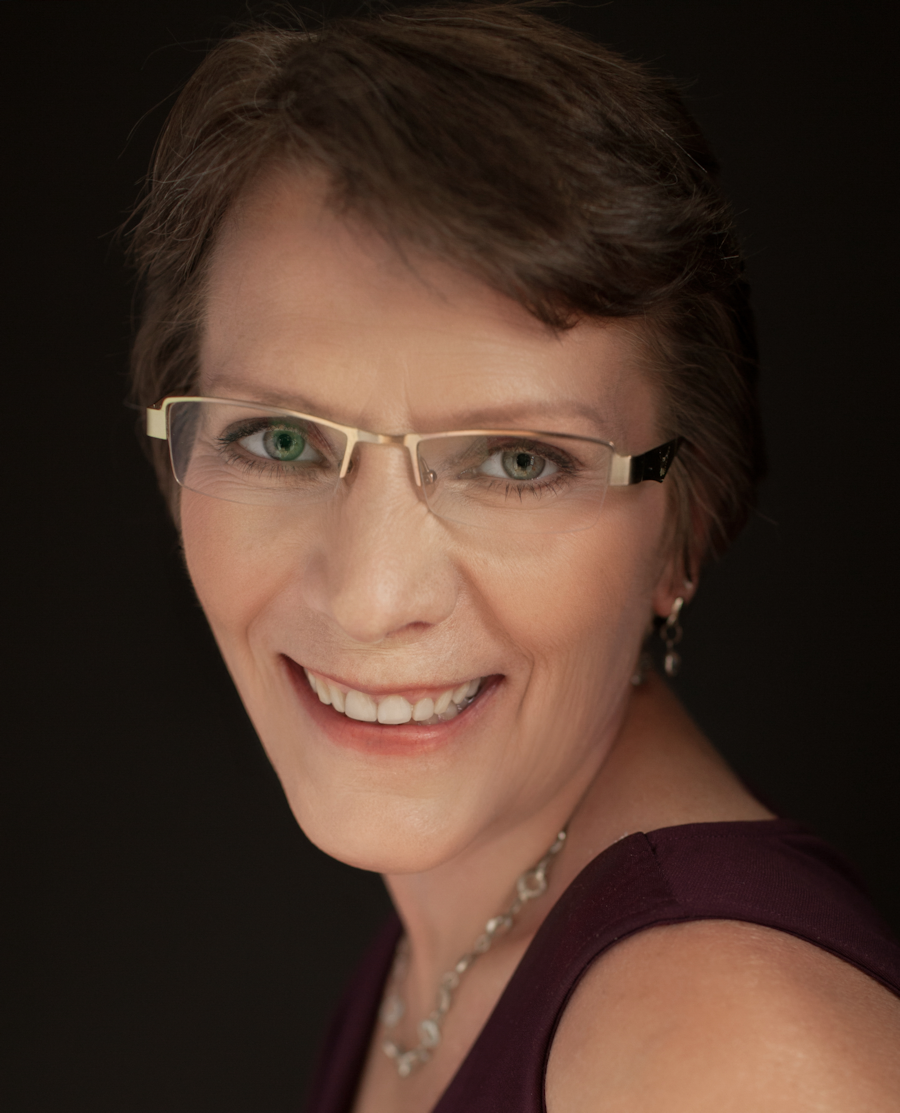 Glenna is the author of heart-touching and humorous nonfiction (Glenna Mageau) and suspense/thrillers (Maggie Thom).

Glenna has always had a love of writing. She first discovered her love of words when she started cutting them out of books. Cat in the Hat was her first victim. When she started cutting words out of books her mom was reading, that's when she learned she could write her own words. She wrote her first book at age of 9. Unfortunately, she took a detour from writing and instead got a degree in Kineseology and then worked in a career that she loved. After getting married and having children she realized she was a long way from her dream. She started the journey back towards it. She published her first book in 2012 and hasn't looked back since.

Since then she has won several awards for her writing. 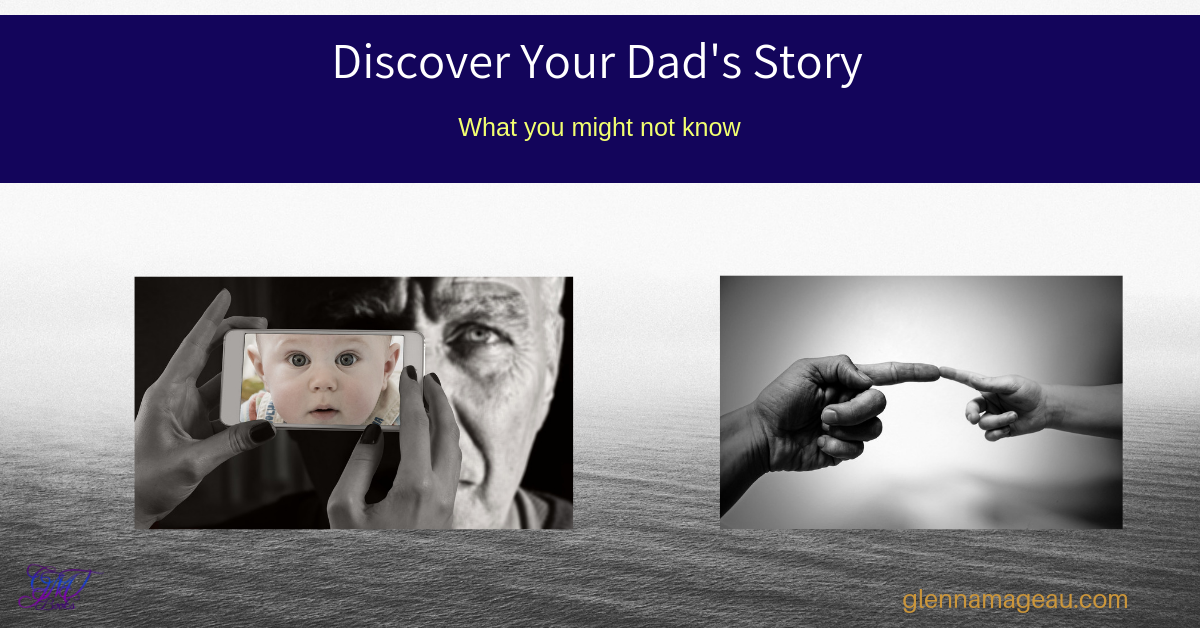 I don't know a lot about my dad's story. It is something I regret. 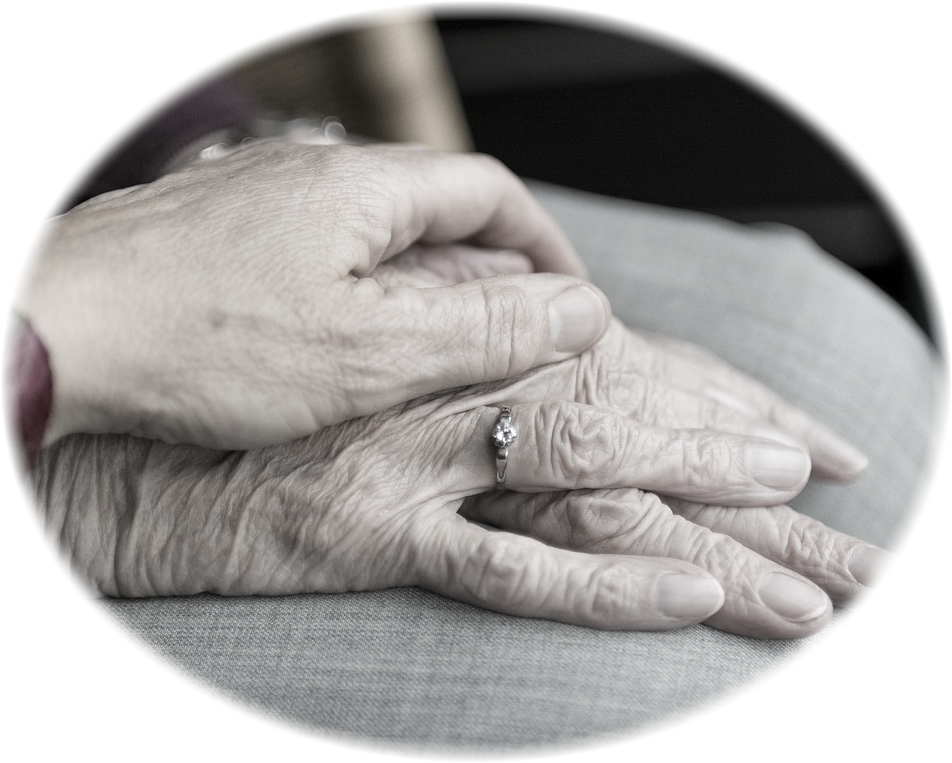 The expectations of her as a child shaped who she is. 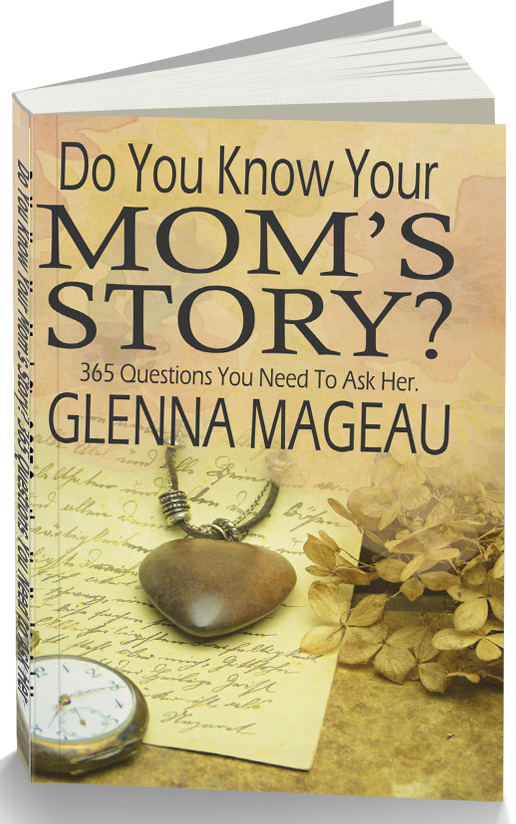 It's time to discover her story.